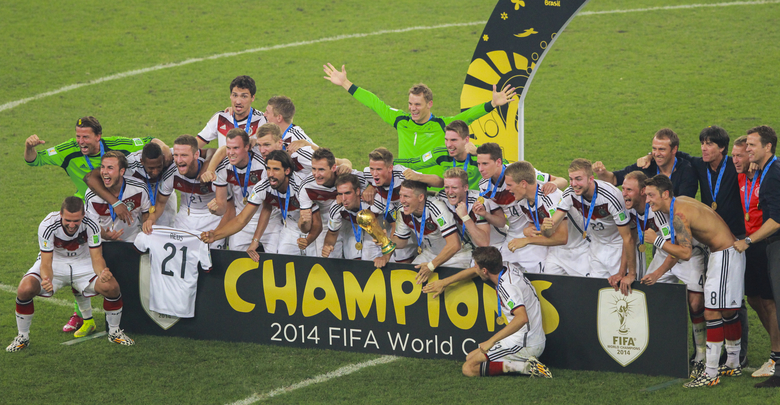 Though we are still many months away from the first ball being kicked at the 2018 World Cup Finals in Russia, many bookmakers are already listing their odds for which side will be lifting the trophy in July. Interestingly, the Sport Nation odds suggest that there are two countries in particular that will go in as favourites, as it stands.

That being said, looking down the list there are many teams that will go into the tournament thinking that they will be able to go all the way. Let’s take a look at some of the main candidates to win the famous gold trophy next summer.

It should come as no surprise that Joachim Löw’s side are set to go into the tournament as bookie’s favourites. Germany are the defending champions after winning the 2014 World Cup in Brazil, famously dispatching the hosts 7-1 in the semi-final before defeating Argentina 1-0 after extra time in the final.

The qualifying campaign for the 2018 World Cup has been plain sailing and they look strong ahead of what should be a big test next year. The win in 2014 was the most recent of 4 World Cup wins, and not many would bet against them making it 5 in Russia

However, their most recent tournaments have been a mixed bag. Euro 2016 did not go to plan at all for Germany, with a disappointing exit in the semi-final against the host nation France. They did win the 2017 Confederations Cup though, which was actually with a weakened side. That is scary stuff, as they have shown they can win tournaments even without their best players.

The side that knocked Germany out of Euro 2016, the French will be looking to go one better in this tournament after losing in the final on home turf in the Euros. This raised big question marks on the bottle of the squad, as they went in as big favourites to beat Portugal.

There is certainly no doubt about the talent they possess though, with an embarrassment of riches at their disposal. Paul Pogba, Antoine Griezmann, Hugo Lloris, Kylian Mbappe, N’Golo Kante and Ousmane Dembele are just some of the names Didier Deschamps could field.

That being said, qualifying has not been without set backs. A loss away in Sweden was a blow, then an embarrassing 0-0 draw at home to minnows Luxembourg came along. The talent is there, they just need to piece it all together.

Brazil were the first team to qualify for the World Cup Finals from the South America section. In what is notoriously a tough qualifying stage, they sit well clear of their competitors. Impressive results such as a 3-0 win at home to Argentina and a 1-4 win away at Uruguay have been stand out performances.

It goes without saying that Neymar Jr will be their star man going into the tournament and a lot of pressure will rest on the young man’s shoulders. This is unlikely to phase him though, as the most expensive player in history is very used to it by now.

The country have famously won 5 World Cups, with the last of those coming in the form of a Ronaldo inspired win in 2002.

Qualifying has been fairly easy for Spain, as you would expect, and they look in decent shape heading into the tournament next year.

The problem that the Spaniards may face is the prospect of an ageing squad, with many of the recent call ups being over 30 years of age, including; David Villa (35), Andres Iniesta (33) and Aritz Aduriz (36). There is no need to worry though, as young stars like Marco Asensio, Isco and Alvaro Morata will still be there.

Though they have only won the World Cup once before, it was a very impressive win in 2010 when they looked like one of the best national teams to ever play the game. If Spain hit those heights again, they will be a force to be reckoned with.

The first country to qualify from the European section, not counting hosts Russia, this Belgium side really mean business.

Though their qualifying group was not the most difficult, you can only beat the teams that are in front of you. Looking at the squad, there is so much talent that on any given day they really could beat anyone. Romelu Lukaku, Kevin De Bruyne, Eden Hazard and Thibaut Courtois among others will make for a very strong starting 11.

It remains to be seen whether or not Roberto Martinez can get these players to perform in a tournament, but it will be interesting to see how they do.

Best Of The Rest

Argentina are currently at 35/4. With Lionel Messi in the side, anything is possible but qualifying has been an absolute disaster so far. If they want to challenge, they need to improve very quickly. Italy and England are both at 17/1. The ‘Golden Era’ seems to have gone for both of these sides, with some promising young players taking centre stage for England while Italy will be relying on their solid defence.

Euro 2016 Champions Portugal are 24/1 and similar to Argentina they have one of the world’s best players in Cristiano Ronaldo. Hosts Russia are 32/1 though a win for them seems unlikely, and other interesting options are Uruguay, Croatia and Chile all at 39/1.

Of course, when matched betting you should be able to make a profit from the new customer offer currently listed by Sport Nation. Completing the offer is not too difficult, though it may take you a little bit longer than some other offers.

When you open an online account with Sport Nation and enter the relevant promo code, you can then go about qualifying for the promotion. The next step is to deposit £200 of your own money to then receive a £100 bonus. Before starting this offer, you will need to make sure you have a big enough bank to cover the potential wagering, and we advise a bank of around £1500.

You will then need to place your first bet with Sport Nation at odds of 2.0 or greater, while placing a lay bet on the same selection at a betting exchange. If you are unfamiliar with the term, a lay bet is to bet on something not to win. Therefore, you will have covered both outcomes and if the first bet loses you are done with the offer, as you will have made your profit on the exchange. If the first bet wins, there is no need to worry, as you should be able to make a large profit from the bonus.

The bonus has a wagering requirement of 7x the deposit and bonus, which means you may need to place £2100 worth of bets if the whole wagering needs to be completed. You will either complete the wagering or keep placing bets until you have no funds left with Sport Nation.

You will then be able to track your profit using our Add Single Bet feature on the matched betting calculator. The full step by step guide for this offer can be found in the premium section of MatchedBets.com, where you will be given all the information you need to turn this offer, as well as many others, into a profit.