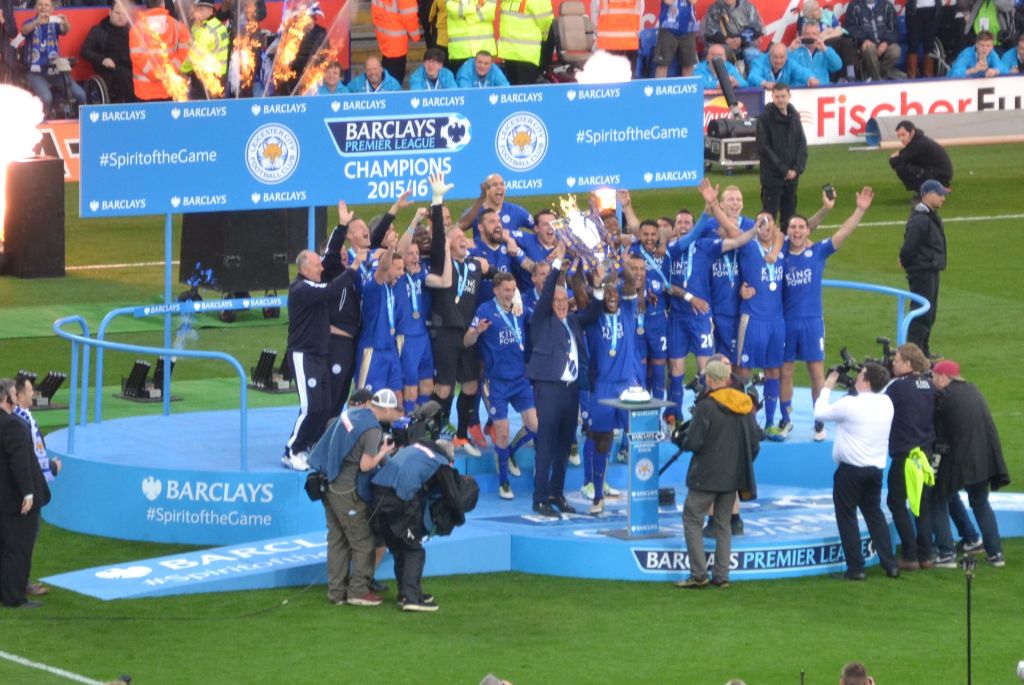 Unless you’re Prince Harry, learning that the odds of having a ginger-haired baby at 35/1 can be quite disconcerting and leave you looking at the milkman, wondering what colour his hair was before the grey set in.

But 35/1 is trifling, however, compared to some of the greatest footballing shocks of all time.

As the season wore on, everyone kept expecting the Foxes to fall over, especially when they were caught by Arsenal following the Gunners 2 – 1 win when the two sides met at the Emirates.

Leicester held their nerve and regained their form. Within a month, they were ten points clear of Arsenal as the Gunners crumbled in an all too familiar manner.

Indeed, Wenger’s squad showed the mental fortitude of a man who learned that he is to be the proud father of triplets which according to TAMBA, the Twins and Multiple Births Association, the chances of that happening are 64/1.

By curious coincidence, the odds of Arsenal collapsing as any season progresses are 1/64 on.

The Foxes found themselves pursued by Tottenham but that crumbled as the title was won thanks to Spurs 2 – 2 draw at Stamford Bridge, leading to Match of the Day registering its’ highest housewives viewing figures as Gary Lineker made good on his promise to present the first show of the following season in his underwear. Otto Rehhagel’s team were functional at best and depressingly dull to watch. Imagine the Crazy Gang were an international team but without the madcap antics on and off the pitch.

Qualifying for the finals against the odds – they finished top of a group including Spain – they quickly established their credentials as party-poopers by beating hosts Portugal 2 – 1 in the opening game. Held by Spain, they lost to Russia and progressed to the last eight on goals scored (4 vs. Spain’s 2).

France were expected to crush them, instead contriving to lose to Angelos Charisteas’ goal before the Czechs were numbed into submission in the semi-final; Traianos Dellas scored in the 105th minute to settle the match.

The Portuguese awaited in the Estadio da Luz and showed they had learned nothing from the Greeks progress. It was car crash football with that man Charisteas struck again, leaving the world scratching its’ head at how.

It was a feeling Cristiano Ronaldo was to understand again at France 2016. Another European Championship final, another match he failed to contribute anything worthwhile toward. At least he got a winner’s medal that time. Rehhagel laid the template for Euro 2004 six years earlier. Kaiserslautern wasn’t noted a hotbed of German football. Their glory days were in the 1950s before the Bundesliga was formed in 1963. A title in 1990/91 was to this point, their third and final title win.

ehhagel’s side was well-organised, hard-working and confident. And newly-promoted. Relegated in 1996 to 2.Bundesliga, they returned at the first time of asking but with the ambition of mid-table obscurity.

Outsiders before a ball was kicked – their 250/1 odds are the same as a baby being born on its due date according to recent research by the Betway Insider team – and a 1 – 0 opening day win at Bayern Munich did little to shorten them.

After four games, Kaiserslautern hit the top of the table and stayed there until the end of the season. Bayern, hot on their heels the whole time, were undone by a 2 – 0 defeat in the reverse fixture against Rehhagel’s men.

As they celebrated lifting the shield, few begrudged Rehhagel his success, not even the Bayern Munich board which sacked him in 1996. Not so much a surprise winner as an incredible loser. It was football’s Devon Loch and Louis Oosthuizen roled into one. The Italians led Liverpool 3 – 0 at half-time thanks to a first-minute Paolo Maldini goal and a brace from Hernan Crespo and still lost.

Online bookmakers slashed their odds to 1/100 for Milan to lift the Champions League while Liverpool didn’t drift, they plummeted to 359/1 to win in ninety minutes. Even the draw was 99/1. You were more likely to find yourself living in a Truman Show simulation than Liverpool winning from that position.

Fifteen minutes later, the bookmakers’ hearts were pounding. Gerrard, Smicer and Alonso scored in an incredible six-minute spell to bring the final level at 3 – 3. Relief spilled over at 90 minutes when the scores remained level.

It’s a match Andriy Shevchenko wants to forget with Jerzy Dudek bringing off an incredible double-save. The Pole promptly earned himself a move to Real Madrid as Liverpool won the penalty shootout 3 – 2.

It’s a madness no European final has since match. More than half-a-century of hurt was supposed to be laid to rest in 2014. Brazil never forgot the 1950 World Cup where Uruguay pounced to take the trophy with goalkeeper Moacir Barbosa never shedding the spectre of defeat.

In an interview in 2000, he said “”The maximum punishment in Brazil is 30 years imprisonment, but I have been paying, for something I am not even responsible for, by now, for 50 years.” He died shortly afterward.

But that will surely pale by comparison of the utter humiliation of the 2014 World Cup semi-final. Belo Horizonte, the city which saw the USA stun England with a 1 – 0 win, was left stupefied by this semi-final. Germany were 4/1 to win the semi-final, Brazil 2/1 favourites.

The odds of Germany scoring 7 were 453/1. When Sami Khedira hit Germany’s fifth in the 29th minute, alien life was more likely to be found than Brazil keeping the score below 10. Somehow, they contrived to do so. Andre Schurrle added two more in a devastating performance which wrecked a Brazilian dream.